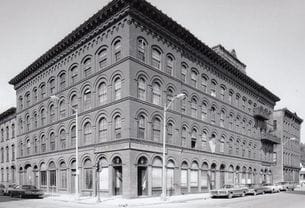 Former Gurley Building, Troy, New York
William Gurley (1821-1887) founded a scientific instrument manufacturing company in Troy, New York in in 1845. His partner was James Phelps, and the company was known as Phelps & Gurley. William's brother Lewis E Gurley joined the company in 1844 and in 1851 the name was changed to Phelps and Gurleys. In 1852 Phelps left the business and the name was again changed to W & L E Gurley. They bought the Charles Wilder Thermometer Company of Petersborough, New Hampshire in 1905 and moved it to Troy. The company remained under family control until 1968, when they were acquired by Teledyne and called Teledyne Gurley. Teledyne sold the company in the early 1990s, and they continue to operate as Gurley Precision Instruments.

Gurley was best known for it's engineering and surveying instruments. However, they did make meteorological instruments as shown by this 1968 catalog of wind instruments which may be downloaded below (14 pages):