For the month of December 2016 I analyzed the accuracy of my Friez ML-3A microbarograph by comparing its recorded values with values from my mercury barometer and US National Weather Service (NWS) values from O'Hare Airport near Chicago, Illinois.  O'Hare is 22.7 km WNW of my location.  I set the microbarograph to sea level pressure and calculated sea level pressure from the local pressure measured by my mercury barometer.  Values were determined once-per-day near midday.

The values from my ML-3A microbarograph required some analysis because the original 4.5 day clock was replaced by a monthly quartz clock from an Oakton hygrothermograph.  The replaced clock speed is not an exact match for the Belfort 31 day chart.  In 31 days (744 hours) the chart actually advances 782 hours on the chart.  The chart is shown below: 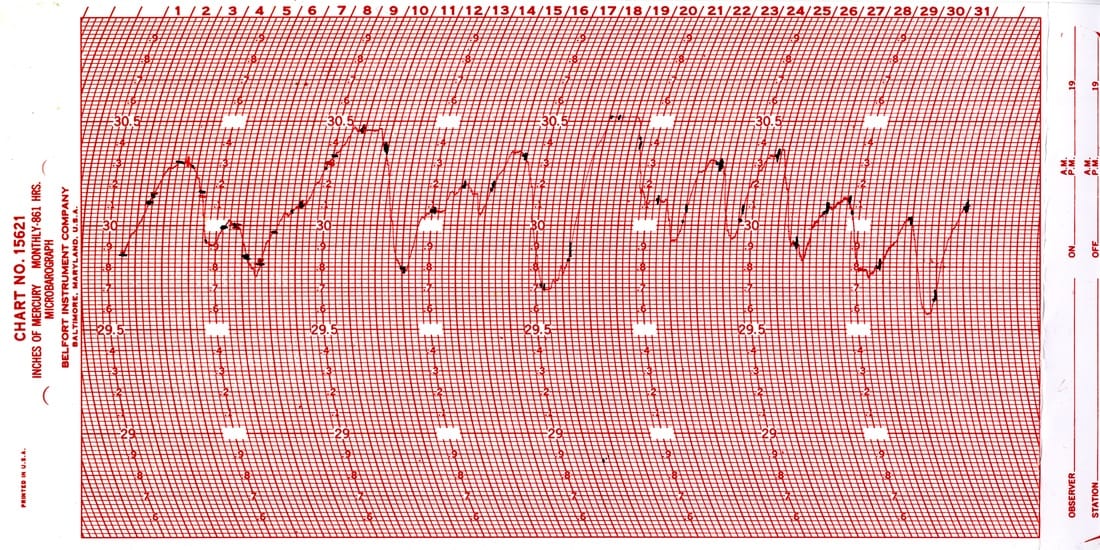 When reading the chart, the cumulative time of the data point on the chart should be 784/744 times the actual elapsed time at which the NWS and mercury barometer readings were made.  I wrote an Excel spreadsheet to make this time correction and to tabulate the error between the microbarograph and both the NWS and mercury barometer data.  The 'Chart Day' and 'Chart Decimal Hour' identify the points to read the chart.  This spreadsheet is shown below: 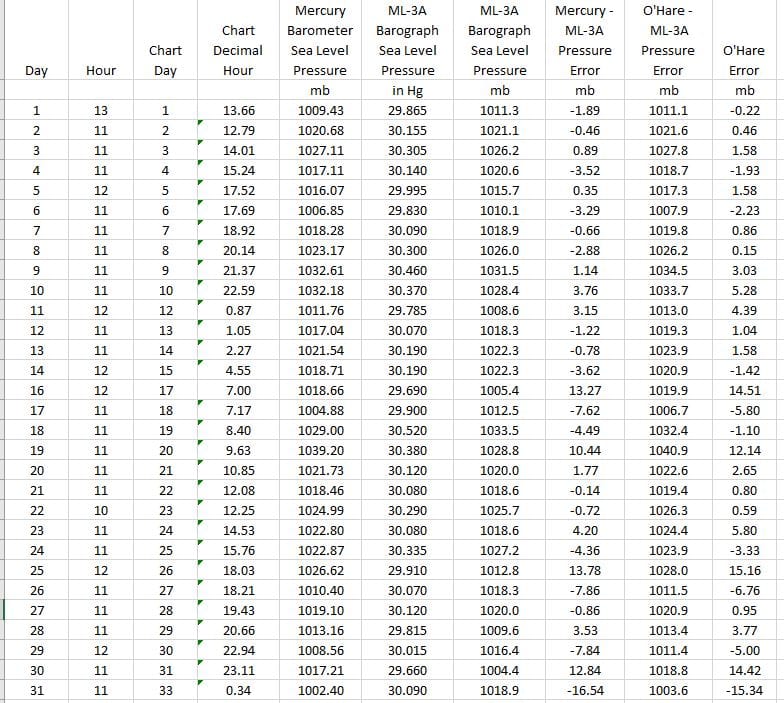 The 8th column shows the error calculated as Mercury  - ML3A, the last column is O'Hare - ML3A.  ​I plotted this data for analysis, as shown below:
Several things are going on in these plots. In the plot on the left: In the plot on the right:
​I performed the same evaluation, but comparing the ML-3A data to O'Hare Airport NWS pressure data. The results are shown below:

This comparison shows the same behavior, except that the microbarograph error trend line is shifted about 1.5 mb higher. The reason for this difference is analyzed in the 'Mercury Barometer Data Check' which may be found here. The average drift rate on the left chart is upward 0.059 mb per month, it's lower because of this 1.5 mb shift in the data. The average non-linearity of the ML-3A data is 0.40 mb per mb of barometric pressure compared to O'Hare data.

My conclusion is that my ML-3A microbarograph is very non-linear. It's accurate near 1020 mb but the error increases as the pen goes higher or lower. One potential cause is that the instrument has dashpots to damp out pen movement. My dashpots are filled with a 50% blend of Belfort dash pot oil and mineral oil. It was suggested to me that the Belfort oil was too viscous. I may drain the dashpots for February data collection and fill them with 100% mineral oil to see if that improves linearity. The rapidity with which the barometric pressure changed in December may also have an effect as the pen may lag behind in rapid pressure changes.

For the month of January I will repeat this analysis and will also perform the analysis with four other instruments: All of these instruments except the ML-3A have 7-day clocks and use 7-day charts.