Francis W Reichelderfer
Francis W Reichelderfer (1895-1983) was appointed Chief of the US Weather Bureau in December 1938 and was in office when the bureau was transferred to the Department of Commerce. He would serve in office for 25 years until retiring in 1963. Over these years he was responsible for bringing the Weather Bureau into a progressive new age. He also helped found and was the first head of the WMO when it was created in 1951.

Educated as a chemical engineer, he started his meteorological career in the US Navy during World War I. After the war, he was the meteorologist for the the first transatlantic flight of an airplane, the Navy's NC-4 seaplane, in May 1919. He was an experienced aviator, and served as Chief of Naval Aerology (i.e., meteorology) from 1922 to 1928, working in the Weather Bureau building. In 1931 the Navy sent him to Bergen, Norway to study Bjerknes' theory of fronts and air masses.
Development of Radar

AN/CPS-9 Radar
In 1954 the US Air Force introduced the AN/CPS-9 radar, the first radar specifically designed for meteorological use.  56 CPS-9s would be produced and they remained in service at military bases until 1984.  The CPS-9 was an X-Band radar in the vicinity of 10 GHz.  It represented a step forward in meteorological radar, but the observational data was not generally made available to civilian users.
Numerical Weather Forecasting
The idea of numerical weather forecasting was first proposed in 1904 by Vilhelm Bjerknes of Norway. The first application of numerical forecasting by manual calculation was in 1922 by Lewis Fry Richardson in the UK. However the weather data reduction and computational methods available at the time were inadequate for the task, as it took 6 weeks to produce a 6 hour forecast.  However the development of electronic computers in the 1940s, intended for problems of ballistics and code-breaking, suggested that computer numerical forecasting might be practical. 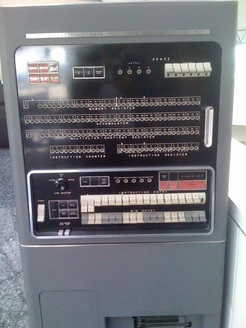 IBM 701 Operator's Console
In May 1946 a proposal was submitted to the Naval Office of Research and Invention by the Institute for Advanced Study at Princeton University to apply electronic computers to weather forecasting. Reichelderfer, John von Neumann, and C G Rossby were all involved in initiating this proposal but their exact roles are not precisely ​known.

​In 1948 the first numerical forecast using a simple barotropic fluid mechanics forecast model with one vertical level was performed on the ENIAC computer at the University of Pennsylvania. It took about 24 hours to produce a 24 hour forecast. A faster computer was subsequently developed and built at Princeton which allowed use of a model with 3 vertical levels. The forecast calculation took 5 minutes instead of 24 hours. ​

​In 1954 a Joint Numerical Weather Prediction Unit (JNWPU) was created by the Weather Bureau, US Air Force, and US Navy. They installed an IBM 701 vacuum tube computer in March 1955 for numerical forecasting, using the Princeton 3 level model. The 701 was IBM's first commercial scientific computer and was based on the machine developed at Princeton. It was introduced in 1953 with 2k of 36-bit word, cathode ray tube memory, fixed-point arithmetic, and magnetic drum storage. By the summer of 1955 the JNWPU was preparing numerical forecasts twice per day 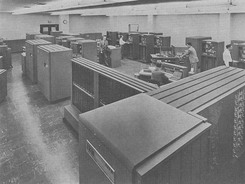 IBM 704 Installation
In 1957 an IBM 704 vacuum tube computer with 4k of 36-bit word, magnetic core memory and floating point arithmetic was installed. Forecasting results with the three level model were not satisfactory and in 1958 the JNWPU reverted to a single level model. This was successful and produced results useful to forecasters. The 704 was used until 1960 when an IBM 7090 computer was installed. The 7090 was IBM's first commercial transistorized scientific computer, with over 50,000 germanium transistors. By 1959, computer-plotted forecast maps were being sent out on the new National Facsimile Circuit. By about 1960, the computer products exceeded the quality of manually produced products. By 1970, about 500 weather charts were being faxed out daily. 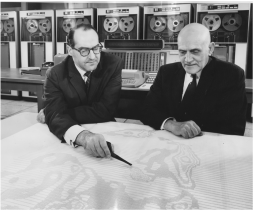 Reichelderfer and IBM 7094, 1962
In 1961 the JNWPU was broken up into its separate Weather Bureau, Air Force, and Navy components. The Weather Bureau component was called the National Meteorological Center (NMC) in Suitland, Maryland.  In 1962 the NMC upgraded to an IBM 7094 computer, which was backward-compatible with the 7090.  It introduced double-precision floating-point arithmetic and allowed a return to a 3 level baroclinic model.  A lower-cost IBM 1401 computer was used to transfer data from punched cards to magnetic tape to free the 7094 from slow card reading and printing tasks. 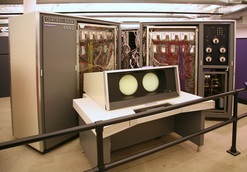 CDC 6600
In 1966 a faster CDC 6600 computer was installed, and a 6 level baroclinic model was used.  The 6600 utilized separate processors for tasks such as memory access and input/output, allowing the CPU to operate at the then-record speed of 10 MHz.  Also the CPU was capable of parallel instruction processing and had instruction cache memory.  The first global forecast model was run in June, 1966. Solar radiation effects were added to the forecast model in 1967, and moisture effects and latent heat were added in 1968.  The 6600 would remain the Weather Bureau's primary forecast computer until 1973, when an IBM 360/195 was installed.
Satellite Meteorology 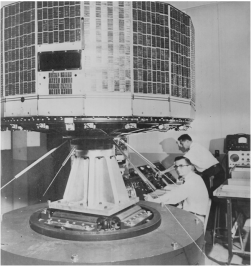 Prelaunch Photo of TIROS I - 1960
The White Sands Missile Range was established in New Mexico in 1945 in order to test captured German V-2 missiles and later American ballistic missiles.  Reichelderfer was impressed by photography from ballistic missiles launched at White Sands, which hinted at the usefulness of space-based meteorological instrumentation.  In 1958 Reichelderfer created the Weather Bureau's Meteorological Satellite Laboratory (MSL) to provide meteorological inputs to NASA's weather satellite program.

In February  1959 the US Navy launched the Vanguard 2 satellite into medium earth orbit to measure cloud cover distribution for 19 days and the density of the atmosphere.  Vanguard 2 was only partially successful due to spin stabilization problems and is still in orbit, with an expected orbital life of 300 years.
ESSA
Go to next page.