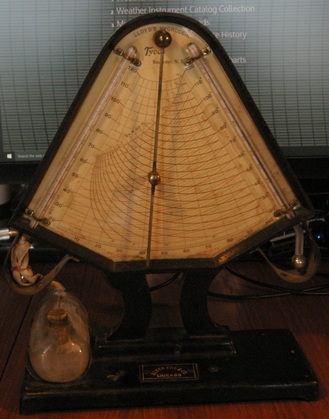 This Tycos 1300A Lloyd's hygrodeik is shown in the 1909 CENCO catalog, 1919 Tycos industrial instrument catalog and continues to be marketed in the 1933 W M Welch catalog, all of which are available on this website.  It probably dates from the 1920s, the Tycos logo suggests it was made before 1932.  The thermometer on the left measures the wet bulb temperature while the one on the right measures the dry bulb temperature.  To read the instrument, you enter the psychrometric chart in the middle at the mercury levels in the two thermometers and move the stylus to be above the point of intersection of the two curves.  The relative humidity is then read on the bottom scale under the stylus.  The dew point temperature can also be read.  Though primarily a laboratory instrument, the 1933 Welch catalog indicates that this model was used by the US Weather Bureau for rapid relative humidity determination.

This particular instrument has a plaque that indicates it was sold by Almer Coe & Company.  They were prominent Chicago opticians who provided evidence in the 1924 murder trial of Leopold and Loeb.  They identified the unusual eyeglasses found at the murder scene as belonging to Leopold, providing the key break in the case. 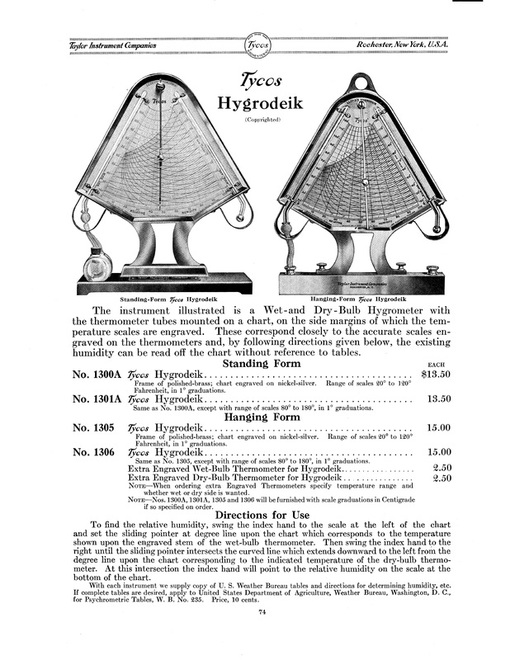 This is the 1919 Tycos catalog page showing the 1300A hygrodeik.  A wall-mounted model was also manufactured.