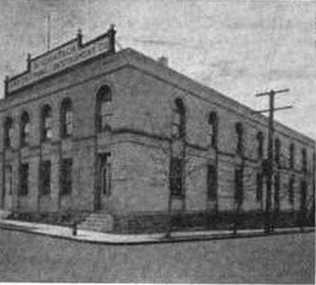 Bacharach Building 1921
Hermann Bacharach founded his company in Pittsburgh, Pennsylvania in 1909 as an importer of air flow meters and gas measuring instruments from Germany.  Bacharach built it's own manufacturing facility in Pittsburgh in 1915.  While primarily an industrial instrument manufacturer, over the years they manufactured barographs and thermographs (using circular charts) as well as hygrometers, hygrographs, and sling psychrometers.  They continue to be a leading manufacturer in combustion gas analysis.

In 1949, Paul Hiltz received a US patent for a hygrometer design that used the hygroscopic properties of a goldbeater's skin membrane to measure relative humidity.  Goldbeater's skin is made from cow intestine.  The patent was assigned to the company Serdex, Inc. of Boston, Massachusetts. Bacharach made hygrometers and hygrographs under the Serdex patent.  I don't know the current status of Serdex, Inc., I can find several existing companies called Serdex.
From 1972, a catalog from Bacharach Instrument Company is available below (22 pages);

Download File
The following is an undated catalog page for a Bacharach Tempscripe thermograph (1 page):

Download File
The following is an undated catalog page for Bacharach hygrometers (1 page):

Download File
The following is an undated catalog page for a Bacharach sling psychrometer (1 page):